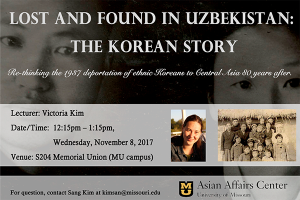 In August 1937, Joseph Stalin decided to deport ethnic Koreans from the Soviet Union’s Far East to Central Asia. In less than two months, more than 170,000 people were loaded into cargo trains and transported to Uzbekistan and Kazakhstan on a horrendous journey across Siberia. Eighty years later, more than half a million Koreans still live in the former Soviet Union, mostly in Uzbekistan, Kazakhstan and Russia. Their tragedies are also the stories of courage and survival that echo in the present-day global drama of forced migration.

Victoria Kim’s grandfather came to Uzbekistan in 1937 as a 7-year-old boy on a cattle train. His life story — together with the accounts of other Korean deportees — inspired Kim to produce her multimedia documentary long-read “Lost and Found in Uzbekistan: The Korean Story.” At this event with the MU Institute for Korean Studies, Kim will talk about this unique diaspora in a region still unknown to many and about her work in promoting the knowledge, history and culture of ethnic Koreans in the former Soviet Union.

These four videos capture Victoria Kim’s lecture during this event:

Learn more about this project in these multimedia pieces: